One of the most popular events in Spain, the La Tomatina – world’s biggest vegetable fight owes its fame to the people of the 19th century who started this largest vegetable fight rather the “TOMATO WAR” on earth. It is a traditional festival of Spain, which takes place every year on the concluding Wednesday of August in the Valencian township of Bunol, a small town situated in east Spain and geographically at a distance of 30 km from the largest inland sea, the Mediterranean Sea. The festival evokes a pure ecstatic feeling of fun and enjoyment in the minds of the participants.

There are hearsays of different kinds regarding the origin of the La Tomatina festival. Here are the two most interesting ones:

The early commencement of the festival is not known precisely. However, the most convincing belief is that in 1945, during a parade of “gigantes y cabeduzos”, (meaning, parade of “Giants and Big-Heads”) “not so old” men, who wanted to take part in the event, arranged a bash in the town’s main square, the “Plaza del Pueblo”. They used tomatoes from a nearby vegetable stand as their artilleries. Later on the cops intervened and compelled the guilty individuals to pay for the indemnity incurred. However the smell of fun was already sensed and the act was repeated on the same day in the consequent years that followed. Every time the police had to bring an end to the fight. This was thoroughly enjoyed by the people as more and more individuals got involved with every passing year. Although the festival got popular yet it was abandoned with threats of severe punishment. 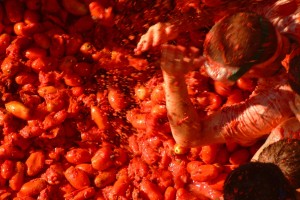 After a period of time in around 1950, a small group of boys planned to celebrate the festival with singers, music and comedy. The mind boggling part was the coffin in which there was a big tomato which was being carried by the boys and the musical band playing the march. Owing to the popularity of this unique festival and the appealing demand, 1957 was the year in which this event got its official exposure to the outer world. This progress came with definite rules and regulations.

Another noticeable year was 1975, from which onwards “Los Clavarios de San Luis Bertran” (San Luis Bertrán is the patron of Bunol) brought those tomatoes, which was previously brought in by the people themselves. After 5 years of eager wait, the town hall overtook the responsibility of celebrating the festival.

The celebration of this huge event starts with the “Palo Jabon” or the greasy pole. The objective is to climb the greased pole with a ham on the top. While this happens, the crowd gets into creating an atmosphere of music and dance with enthusiastic participants going into frenzy, as water from hoses get poured on them. It’s hilarious as the crowd climbs on one another trying to reach the top to claim the ham. When a fellow manages to drop down the ham off the pole, it marks the beginning of the tomato war, which is signalled by shooting five bulbous (tomato packed rockets) in the air. The crowd breaks into a deafening roar and the chanting of the insane people going crazy with madness rises onto a fever pitch. The indication for the “tomato shower” is made around 11 am, when another loud shot calls out and the madness begins. As the trucks make their appearance, they drop down heaps of red and juicy tomatoes in abundance in the area of Plaza del Pueblo. After a breathtaking 1 hour, the insanity and rush comes to an end which is marked by the second and the last shot in the air. The town looks spectacularly red with smashed tomatoes spread on the streets forming a carpet-like cover. After the end of the event, the fire trucks come and wash down the cobblestone streets.

For the safety of the participants and uninterrupted madness, there are some rules that are strictly regulated by the city council:

The feeling of this madness and integrity of desire can only be palpated when you are roaring your heart out among thousands of similar excited minds and grooving bodies. The hangover of the intoxicating feeling of passion expressed through the brilliance of red colour, frantic attitude, and joy make everyone wait for the next concluding Wednesday of August every year. As the satellite view of the earth narrows down onto you, you may find yourself matching up to the world’s best music, “The Rhythm of Your Heart” in “La Tomatina”! 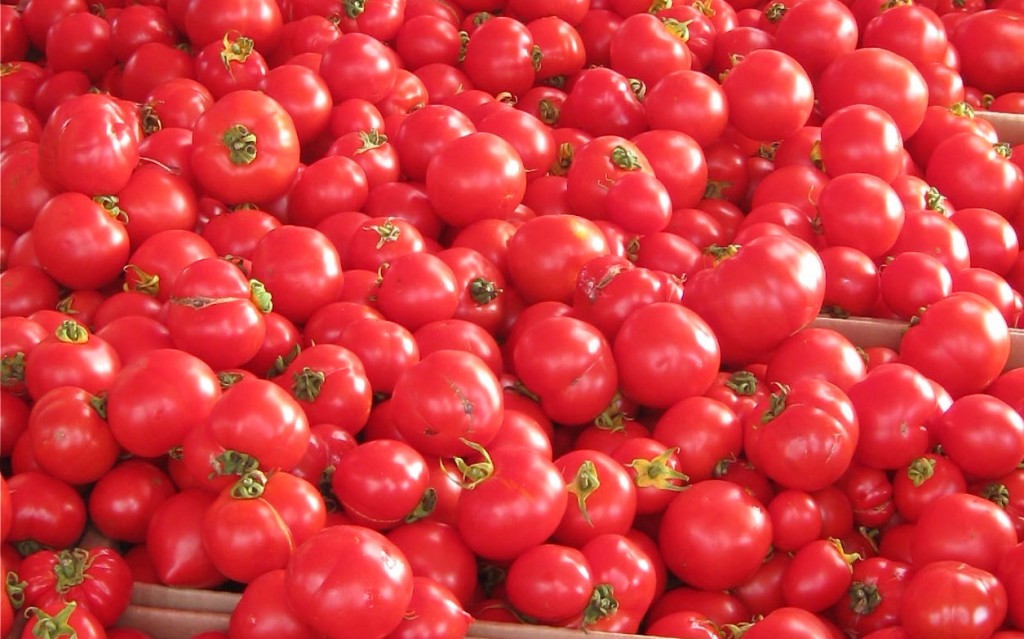