All Roads Lead to Munich for the Oktoberfest

“O’zapft ist!”… Ah! There is no better time to enjoy a beer than to do it at the Oktoberfest!. Where the month of October brings national “dry days” to some corners of the world, alcohol lovers can enjoy fountains of the finest German alcohol in the wonderful celebrations of the Oktoberfest. This is the time of the year when all roads lead to Munich for the Oktoberfest. Known for being the largest fair of the world, the Oktoberfest celebrations in Munich, Germany is scheduled to be held from September 19 to October 4 this year. The preparation for the 17-day festival, including the last minute finishing touches to the big colourful “beer tents” in the enclosure of Theresienwiese drive the people of Munich crazy. 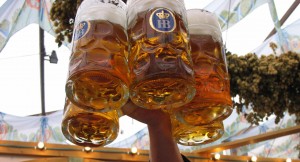 The history of Oktoberfest dates back to the year 1810. The date was October 12 and the occasion was of the prestigious marriage of King Ludwig I to princess Therese of Saxon Germany. The citizens of Munich were invited to take part in this royal festivity in the grounds adjacent to the city gates. The holy occasion of love and merriment has been celebrated as Oktoberfest since then. In over 200 years of its unending legacy, Oktoberfest has seen many colours of change. The original festival was pushed back to the last week of September from October for better weather conditions. Now the festival is held till the first weekend of October and the duration of the festival has extended to 17 days (sometimes 18) from the original 16. Recreational activities have been subjected to changes too. The horse race which used to be an integral part of Oktoberfest was suspended in the year 1960 to give way to newer forms of entertainment.

In Oktoberfest, it would be appropriate to mildly switch the famous saying to “yo ho ho and a bottle of beer”. Over 6 million visitors consume 7 million litres of the finest beer made in Germany every year, making alcohol the other name for enjoyment in Oktoberfest. Be ready to turn out into “Bierleichen” (“beer corpses” in German) as the branded special “Oktoberfest Beer” is far more addictive than its counterparts. Only few designated breweries like the Augustiner-Brau, Hacker-Pschorr-Brau, Lowenbrau in Germany have permission to brew this extra concentrated beer to be served on this joyous occasion. In food, pork sausages are the most favourite. Stalls for other Austrian and Bavarian retreats also blend into the appetite of joy. Decorated beer kegs have become part of the tradition of Oktoberfest as the honour of tapping the first keg goes to the Mayor of Munich. The incident also marks the inauguration of the festival with the shouting of “O’ zapft ist!” (“It’s tapped” in German).

The Colour and Décor 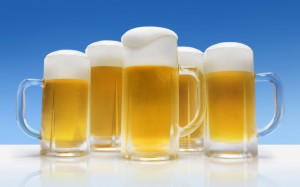 im lights and elegant shades constitute the theme of the colourful decorations in the 17 large party tents. Each tent has its own story and speciality. The first beer keg is tapped in the Schottenhamel tent. Prior reservation in your favourite tent is a must to avoid rush during the on-going festival. The familiar faces of cheerfulness and laughter are accompanied with traditional Bavarian dresses like Lederhosen for men and Dirndl for women. Low lights may set the romantic mood but the spirits start to soar with the beat of the brass band rising through the evening sky. An occasional performance from a famous rock band or a special appearance from a celebrity is also not rare. Elegance may be the look for the daytime but the night is welcomed with bold lights, uncontrolled cheers, and adrenalin rush.

Horse races or Crossbow tournaments may not be a part of the credits but recreation has reached to the next level in the amusement corners of Theresienwiese. In the heat of the day, a ride on the Frisbee Carousel may take the sweat off from your faces while the dramatic lights against the dark background of the night may take you to join the joyride of the Olympia Looping. Dancing in the ethnic and jolly tunes of the Brass Band is like the icing on the cake. Little Jack or prancing Jill will also not be detached from quality family fun as young visitors will be able to participate in a quiz on science and history of Oktoberfest. Edmund Heckl’s ‘Shocker’ makes a comeback this year with the promise of more scares with seven extra rooms of horror. New attractions include an electronic orchestrion DECAP to churn old songs. Regular attractions like small puppy race and acrobatic events also cater the seeker of fun and entertainment.

Entry to the fairgrounds is absolutely free, so is the entry to the party tents if you do not want prior reservations. 15 per cent of the visitors in the festival come from outside Germany. Munich is centrally connected to all of Germany and can be reached by air routes or land transport from other countries. The Oktoberfest venue is safest to get to with public transport like trains and subway. Trains are available up to 2 am in the weekends (1 am in the weekdays) during the Oktoberfest. Private cars or cabs should be avoided because of the high rush of traffic and scarcity of parking spaces during the festival. Hotels like Hotel Maritim Munich, Hotel Seibel, Hotel Andra, Arthotel Munich etc. are in walking distances to Theresienwiese. Hotel Andra provides family beds while Hotel Seibel is closer to a subway station, making it easier to reach for you if you are new to the city. 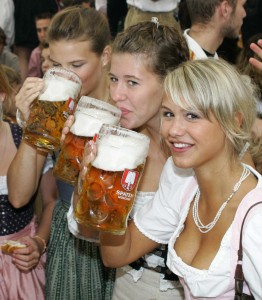 The stage is set. The chandeliers hanging in the middle of the great big white tents in Theresienwiese are tinkling in anticipation of another year’s festivities. Also waiting are the empty beer glasses mounded behind the beer counters to pour joy into the hearts of another 6 million for another year. The twinkling lights circled across the giant bouquets of leaves and velvety dark shades inside Schottenhamel are ready to be lit up brilliantly. But mostly, it is the thriving hearts of the people of Munich who are eagerly waiting to “cheer along with a beer” and to open happiness for another time through the Mayor’s first call of “O’ zapft ist!” marking the beginning of the biggest beer fest of the world – the Oktoberfest!