Holi – The Indian festival of colours 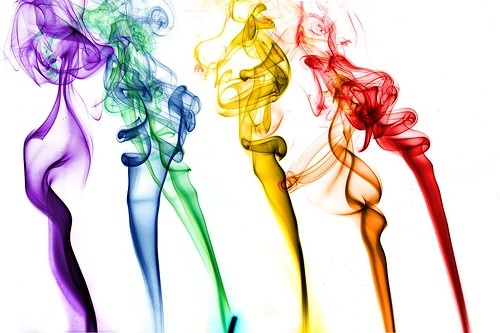 Imagine a world without colours, the smile fades right? Colour is the essence of life. It is the essence of the Hindu festival of colours Holi or Vasant Utsav as well. The celebration takes place on the day of the full moon between the months of February and March. This period falls under the Hindu month of ‘Phagun’. In other words, this celebration is the joyous welcome of spring. Leaving the inhibitions of winter behind, nature sprouts in colours and so happiness manifests itself into the festivities. Holi combines all the elements of joy in an unadulterated form of fun with music, dance, colour and of course food. All the different Indian states have their own unique traditions of celebrating this multi-hued festival.

A myriad legends surround this festival, each more colourful than the other. The legend of Kamdev is very much prevalent in the southern states. The God of love was summoned by the rest of the Gods to shoot an arrow at the ascetic god, Shiva, to get him interested in worldly affairs. As Kamdev shot his arrow when Lord Shiva was in meditation, he was turned to ashes when Lord Shiva opened his third eye. Later, upon the begging of Kamdev’s wife to revive her husband, he obliged. The sacrifice of Kamdev in risking the wrath of the powerful Shiva to help other gods is celebrated even today. The tale of Hiranyakashap and Prahlad is known to everyone in the Indian soil. This tale relates to Holika Dahan a ritualistic celebration a day before Holi. There was a king named Hiranyakashap, who thought of himself as God. He wanted everyone to worship him, but his own son Prahlad was a devotee of Lord Vishnu, and refuse to obey his father’s orders. The king tried various ways to kill his own son, but the son’s devotion to the God always kept him alive. Ultimately the king asked his sister Holika, who was blessed with protection against fire, to take his son and sit on a bed of flames. The legend has it that, Holika was reduced to ashes while Prahlad lived. Till today, people burn bonfires on the evening before Holi to commemorate the victory of goodness over evil. 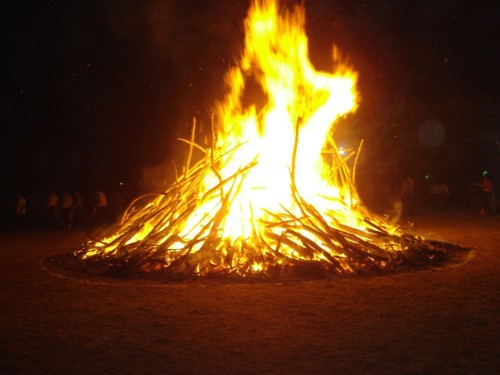 Colour is also an expression of love and there is another legend depicting just that. It is about the love between lord Krishna and Radha. The legend narrates that once young Krishna complained to his mother about Radha being so fair and him being dark. Mother consoled him and asked him to colour Radha up in his own colour. Mischief mixed with love is expressed as Krishna colours Radha to make her look like him. Even today Indians associate Holi with this divine couple and Holi is celebrated with great zest in the places where they are believed to have lived.

The word ‘Holi’ is derived from the word ‘hola’, meaning gratitude towards god for the harvest and good fortune. It is a celebration of good winning over evil. Holi today is a universal festival celebrated among friends and family regardless of cast, creed, colour and race. 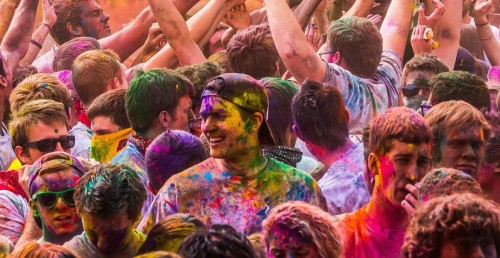 VIBGYOR colours borrowed from the rainbow fly around in the air, landing on faces with smiles. Sprays of liquid fun, tinted with love and warmth is everywhere. The ‘pichkaris’ (water pistol) are so well depicted in the painting of Radha and Krishna, in their boisterous play of love. Few days before the festival of Holi, stores and small shacks flank streets of India selling heaps of colours. The sight of such sprinkled hues has a sporadic effect of feeling good. There is blooming of smiles and emotions in anticipation of the wondrous festival to come, and the air gets ready to be collared. 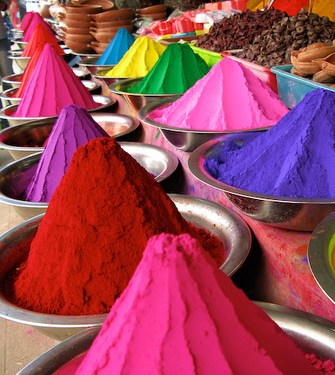 Holi is also a certificate to cross lines, like pranks which might be considered rude on usual days; those become fun and are included in the festivity. Throwing of water balloons filled with colour are excused and even enjoyed. Friends get dunked in mud or water baths, as well as everyone get a license to get intoxicated with the traditional ‘bhang’. The patios and streets turn into a kaleidoscope of colour.

No festivity can be complete without food. Food being an integral part of Indian lifestyle, savoury snacks takes the centre stage during all festivals. Holi delicacies like Dahi bhalle, Kanji wada and Papri are the salty sides of plate while Gujjiya, Puran Poli and Malpua please the sweet tooth. Kesar Chawal is more of the balance between the both. 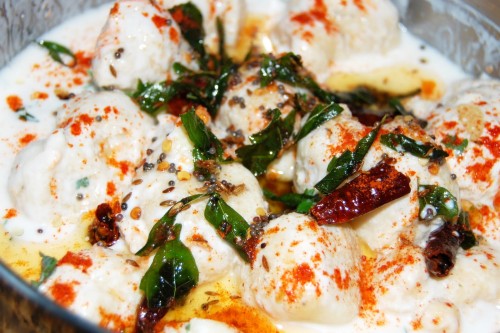 Dahi bhalle are one of the most loved and known snack around India. They are deep fried dumpling made of round split gram lentils, mingled with spices. Settled in a puddle of whipped yogurt and tongue smacking chutney, it is an invitation unparalleled.

Kanji wadas are salty as well as spicy, made of lentils soaked and ground to paste. Deep fried to crispiness and served during Holi, giving the festival a touch of liveliness.

Papris are crispy, crunchy, salty, and wafer thin made of powdered lentil. These are usually mixed with chat or enjoyed alone. An anytime snack for every age. 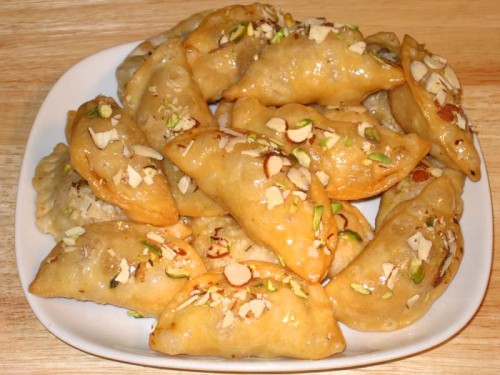 Gujjiya, a favourite of the northern states, are stuffed pastry sweet dishes made especially during the time of Holi. The possible varieties of this dish make it even more popular.

Puran poli is a delicacy in the southern part of the country, towards the Deccan area. This is a sweet flattened bread of flour filled with spices and flavoured with jaggery. 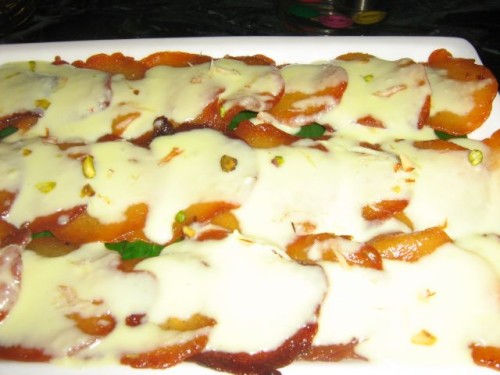 An all-time favourite in the Eastern India is the sweet Malpua. Although, it is well enjoyed around the country all year through, the dish is served during Holi. Made of a batter of flour, which is deep fried and let to sit in a bath of sugar syrup, the Malpua is often served with ‘rabri’ (condensed sweetened milk).

Coloured rice with saffron and a touch of sweetness come to manifest in the Kesar chawal. This is a main dish in many states during the time of Holi. 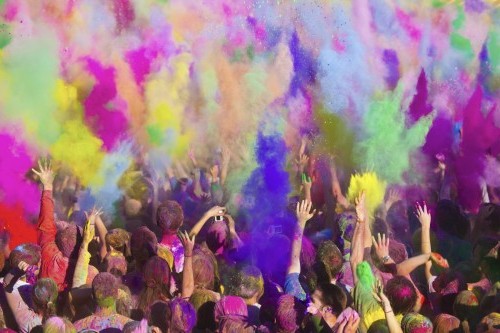 This spring join in the festivity of colours and enjoy the sumptuous spread with gusto. Every festival brings in new hope and positivity. After a whole day of frolic, some quality time spent with friends and family is what makes life complete. May the colours of Holi be predominant in every soul!