A Week in Calcutta during Durga Puja 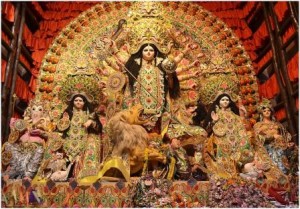 “Bangalir baro maashe tero parbon.” (Roughly means: In twelve months, Bengalis celebrate thirteen festivals). But nothing beats the Durga Puja. The first sign of the approaching festivities is the smell in the air. Some flowers like ‘Kaash’ heralds the arrival of the Devi (Goddess). Colours and vibes get a new meaning when you set your travel charts a little towards East in your Great Indian Tour itinerary. 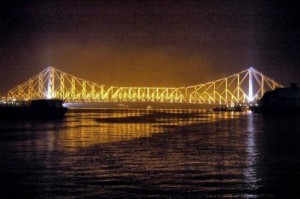 Yes, the City of Joy, that’s the place you should be in, especially during this time of the year i.e., October and November. Almost five million people spill onto the streets in their brand new dresses and joyous mood. Don’t make a big fuss of the crowd because it’s the entire year’s expectation that you will see populating (read, flooding) the streets during this one week of the Bengali’s biggest, grandest festival – Durga Puja. No matter how the capital of West Bengal may look like in other times of the year, Calcutta is a different experience altogether in the wake of the arrival of Bengal’s most loved daughter – Devi Durga. With colour and art stacked simultaneously in every nook and corner of the city, it’s a feast of the heart as well as the eyes! 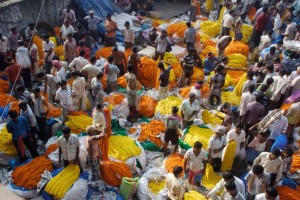 The aesthetics are exceptional and incredibly innovative. This year a drone was made out of lights. There are many other themes too. The awareness of contemporary politics and sports events and portraying them through various forms of lights and kiosks is astounding!

Before even your plane has touched the grounds in Netaji Subhas Chandra Bose International Airport, you can literally witness the once colonial capital’s varied exuberant hues from the skylines. 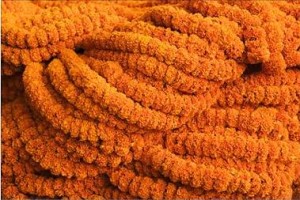 ‘Debi Pakshya’, as it is called; it’s the Bengali phrase for the Divine Lunar Cycle and ‘Panchami’ is its fifth day. The formal beginning of the festival is from “Shasthi” or the sixth day, (the next day). However, your journey from the new terminal strip through the jostling traffic and over-cheerful crowd will give you a hint of the importance of this festival. You are strongly advised to make accommodation reservations well in advance. The city receives a high number of guests from abroad during the festival week. In case you haven’t, let us know and we may be able to help. 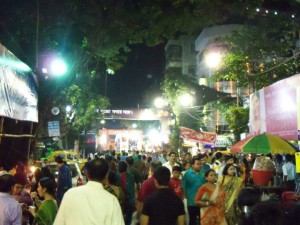 Outside, the puja drums can be heard from early in the morning and this time it is official. The wait has ended and ‘Shashthi’ (the sixth day of the Bengali fortnight) is marking the beginning of the five-day festival. So, you might ask, why the sixth? This day is the day of the Devi’s ‘bodhan’. Through bodhan, Devi Durga receives life in its earthen idol form. From this day till the immersion, she is considered alive and watching over us. There is a long night ahead of you if you want to watch the ritual of bodhan.

Calcutta is a big city. During Durga Puja, it becomes a heck lot bigger to cover because of unavailability of conveyances and the milling crowd. When walking is the only mode available in congested streets, it’s better to chalk out a plan. The Kolkata Police’s Durga Puja guideline map highlighting the different pandal areas can be a lot helpful in this case. If you want to walk in company, then there are many organisations (clubs, NGOs) who arrange joint walking trips to the main heritage puja “mandaps” around the city. 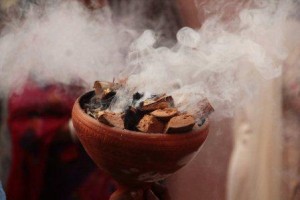 ‘Saptami’ (the seventh day) onwards, regular worship continues. One important event of Saptami morning is the holy bathing of ‘Kolabou’, the wife of lord Ganesha and the daughter-in-law of goddess Durga. The family of course accompanies the goddess to her parents’ house. In the evening, the goddess is worshipped with fire and smoke, hence the ‘arati’ and the ‘dhunuchi’ dance commence. The puja of the Shobhabazar royal house in north Kolkata follows tradition and this very quality attracts crowd every year. The puja in the house of Sabarna Chowdhury in Barisha is famous for rituals and devotion. The puja of Chorbagan Seal family had started almost 150 years ago and still the devotion is unpolluted. The pujas of Laha bari, Hatkhola Dutta bari, Pathuriyaghata Durga puja, Mallick bari, Chatubabu Latubabu are few more names of likeness. Though fading through the glitterati of “barowari” pujas (puja for all), there are people who still come to find the old Calcuttan charm through the ‘sabeki’ pujas. 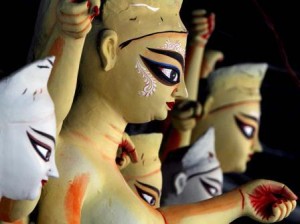 The puja is already halfway through. ‘Astami’, the eighth day, is important for many reasons. On this day people give flower offerings to the goddess in morning. In many places Kumaripuja (virgin worship) is also performed. It is symbolic of the fact that Bengalis respect women and hence this puja is performed. One of the prime places where this worship is performed is Belur Ramkrishna Math. A virgin, Brahmin girl of less than 16 years old is worshipped as the goddess. Numerous people flock to Belur to witness the holy event. It also gets telecasted. Another specialty of Astami is the Sandhipuja. Sandhi means the transition point. 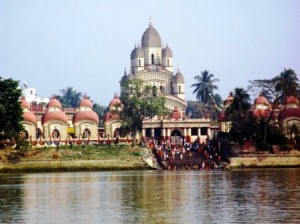 You may avail buses, cabs or private cars from Kolkata to reach Belur. The ‘math’ is situated right beside the river Ganges. The scenic beauty of the place is quite serene and soothing. You can take a boat ride across the river. The famous Dakshineswar Kali temple is near Belur, you may take the boat ride or you can go by road. The Kali temple carries the memories of Shree Ramkrishna Paramhansha. There are 12 Shiv temples adjacent to the main Kali temple. From Dakshineswar you may also go to Adhyapith to see another Kali temple.

The puja almost comes to the end. ‘Nabami’, the ninth day of the puja has an undercurrent of sorrow. Just one more night to go!

On Nabami, take a short trip to the Kalighat temple if you wish. Fancy the razzle-dazzle of the South Calcutta puja pandals? If yes, then first in the line would be Ekdalia Evergreen Club. Singhi park puja, Babubagan, Jodhpur Park, Mudiali, Park Circus Maidan puja and endless names are there to follow. 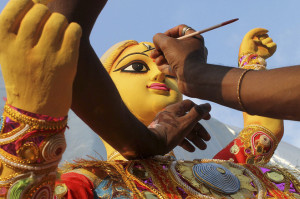 Once you are at the Gariahat – Park Circus area, taste the biriyani specialty of Calcutta. Do some shopping from the sidewalks but beware of the foreigners’ special price. Not cool? Let us move to Kumartuli, Calcutta’s very own potter central. Other than the down to earth people, you will experience some of the most beautiful, artistic clay idols of various gods and goddesses here. The sunset from the riverbanks of Bagbazar is really awesome. Stay a bit longer and you may witness the mesmerizing Ganga puja too. It’s getting dark. Time to jive-in to the Park Street’s party beat. Take a cab and ask the driver to go ‘by meter’ only. 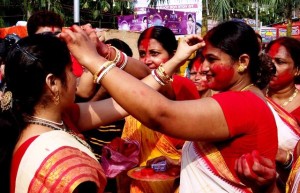 ‘Dashami’, or the tenth day, is the last day of Durga Puja. Two things are important in the Dashami worship: the ‘Boron’ and the ‘Sindoor khela’ (literal meaning: vermilion play). The daughter is going back to her in-laws so the overall mood of Dashami is of sorrow. The married women worship the goddess daughter and her children with sweets, betel leaves and vermilion. They put vermilion on the forehead of the idol, put sweet in the mouth and put betel leaves in the hand of the idol. The whole worship is called the Boron. The implication of this is to bid farewell to the leaving daughter. Sindoor khela is more like ‘holi’ played with vermillion amongst married women. It comes after the Boron and wishing the wellbeing of the husbands so that the women don’t become widows before their time. 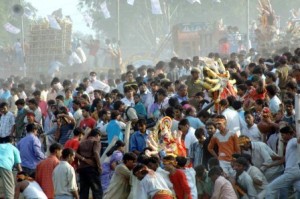 Next is the ‘ghat’ of Baghbazar. By afternoon, the idol immersions start in the riverbank. As per ritual and law, most organisers immerse their idols on Dashami itself though some delay this ritual.

Dashami is also called the Vijaya Dashami. After the immersion, a kind of reunion is organised among kin and friends. It is customary to touch the feet of the elders for their blessings and to embrace and greet the brothers, sisters and friends. It is also the time to taste some mouth-watering Bengali Sweets.

Yes, the week is over before you knew it. And it’s not only the Devi, but you too have to pack your bags. Of course you can stay back to witness the other festivals that follow. The puja festivity once set to roll in Calcutta, ends only with the Kali puja in a fortnight’s time. Life goes on after that. The year’s festivities end with a bang of fireworks. What’s left is another year of expectation and waiting when the Devi will again return for a state hungry for happiness. Oh… and ‘Shubho Vijaya’!